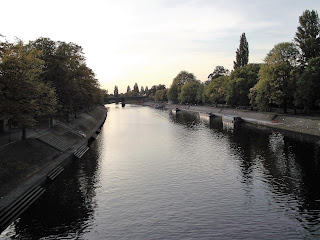 
She is but a river exposed to the ways of man.

There are those who have stolen from her pure banks, pillaging pirates who took what was not theirs to steal. She has risen up again and again to rid their violence from her waters and wash their hurt from this life she claims as her own and one with all.

She tries. She flows. At times, she fails and hangs her river head in shame, as poison spills onto the skins and into the hearts of those she holds most dear.

She wonders, "Can a river be so harmed, so filthy, that she must run dry in order to save what remains as good around her? Can the harm she thought survived, turn her own waters black, poisoned and toxic to the world?" Yet, she flows forward - trying to be stronger, better, safer, cleaner, kinder and knowing the hurts put upon her, now hurt those she loves and those that love her, and it is an ugly thing for those she loves to see and feel.

The toxic waste within her waters strangles air and light from beauty, strength and goodness. She loses her way, her light, her friends and her loves. All those she once served move on in search of sweeter waters. She struggles on in search of cleansing ways and purification so that she may serve well once again.

She cannot continue as a conduit of poison. Those who hurt her, in turn, hurt all she holds dear as that which was forced into her, erupts as poison from her banks upon the ears, eyes, sweet lips and hearts of those she loves most dearly, stealing, thieving, and burning beauty.

She works hard. She tries to cleanse it. She tries to make herself clean and to love well but the toxin is so strong at times. She love you so, yet look at what she does and the shame she feels. And so the cycle goes. Fear breeds anger. Anger breeds hate and hate poisons love.

She is brave at times and a tired coward at others. The work is hard and ceaseless. She reinvents herself daily. She does her best and some days her best is but a disappointment. She flows through your lives as best she can, yet her water love at times runs tainted by every body that has poured their poison into her once sweet waters.

She asks for understanding, if not forgiveness. She learns to expect none as she battle the demons and thieves and wishes you wellness in your lives and in all the loves you give and in all your loves received, wherever you must go to find it.

No matter who comes nor goes, she works on to expunge the poison, to recreate a free, fresh mountain stream, to forgive the ones who stole, to cleanse their hurt from her life force, to fend off the detritus, to filter the toxins out through her reeds and pebbled bed.

At times, she does succeed, at times the banks erode and cave in upon her, and her waters run muddy once more.

To the ones with patient hearts, to those who do forgive, to those who stand strong through the storm, to those who protect themselves from the torrent, she bows her head to you in shame, she bends to your feet in gratitude, with a promise to try again, to continue in her cleansing, for we all deserve to quench our thirst for joy and peace and comfort without the fear of being washed away or poisoned." 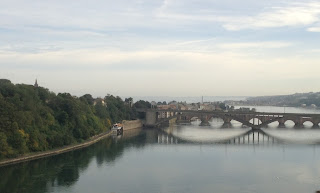 Writers, Artists and Other Things of Beauty

Gillian
Gillian's Art Blog provides a space to investigate the art of life through multimedia approaches including creative and editorial style writing and visual art. Posts every Sunday. Please share your thoughts and questions surrounding the posts you read here. Wishing love and light to each of you. Horn Blowing: Top 12 finish in 2015 Shorty Social Media Awards - Blogger Category: http://shortyawards.com/KilaNalu